A Temper Tantrum or RAGE? 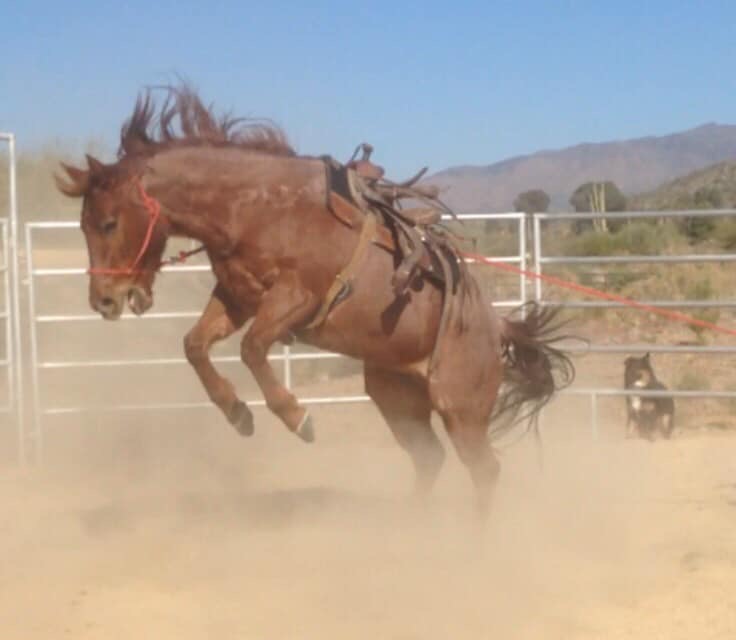 A temper tantrum is described as an uncontrollable release of anger. These outbursts usually occur as a result of unmet needs or desires. They typically happen with younger children who cannot communicate or express their needs and are unable to control their emotions when they become frustrated.

Do horses throw temper tantrums when they don’t get their way?

A lot of times when a horse has a bucking fit for example, people may say the horse is just having a temper tantrum because they don’t want to do as the rider says. Are we equating the horse to a human when we do this? Are they at all similar?

Because the equine brain is much less complex than our human brain, there are simpler explanations for their behaviour. Horses do not have sudden outbursts of uncontrollable anger. Anger is often misinterpreted in horses. Horses are not naturally aggressive animals. They do not build up a lot of anger that would result in a temper tantrum as a release. Rather, their behaviour is a direct reflection of the stimulus they are subjected to.

Horses do have emotions. There are seven emotional systems of the brain in all mammals. While humans have a much larger frontal lobe that makes us capable of a higher thought process, the subcortical structure of both human and other mammals’ brains are very similar and this is where we find the primal emotional systems.

Horses are capable of RAGE. RAGE causes feelings of frustration and is displayed by pinning the ears, swishing the tail, stomping a hind foot, snaking the head and neck, tossing the head with ears pinned, biting, charging, striking, and kicking. Bucking is a typical FEAR response. The horse has been pushed beyond their fear threshold and their brain has kicked over to fight or flight. They are trying to escape from a scary situation. Bucking episodes in relation to saddling and riding are usually an indicator that the horse was frightened. Horses will buck and kick up during PLAY, but there is a stark difference between PLAY bucking and FEAR bucking.

Young children throw temper tantrums when they cannot express their needs or desires and are unable to control their emotions. Often times, even after the child has acquired whatever it was they wanted they remain inconsolable. Horses are not like this. As soon, as they have escaped from the stimulus that produced the bucking response, they quit. Again, their behaviour is a result of the stimulus that we impose on them. So who’s fault is it? The horse or us? Do horses get angry and run around the field, bucking like maniacs when they “don’t get their way”? For example, when another horse chases them away from the hay? No. It is not in their nature to experience uncontrollable releases of anger, even in relation to the arousal of the RAGE system.

We have the mentality that because we are at the top of the food chain, the horse has to do what we say regardless of their emotions. And then we take it as a personal insult when the horse blows up after we have ignored every indicator that they were going to. As humans, we are naturally anthropomorphic and a touch narcissistic when it comes to horses. We make it all about us and how the horse feels towards us. We take those reactions and make them against us on a personal level. It’s not about us. Maybe it was about the back cinch grabbing him on the turn for the first time at the lope that day. Maybe it was about the need to recover and slow down, but the horse felt your spurs and was startled. It may be about any number of things, but not you in particular.

The horse doesn’t see us as top of the food chain or the boss. They see us as any other interaction with another animal. They aren’t aware that they owe us anything or that they are expected to behave a certain way because we’re number one. Their main objective is to survive. And if we make the horse feel we threaten that in some way, we had better be prepared for them to do whatever they feel necessary to survive our interaction.

It’s our job to prevent and/or diffuse such situations, not provoke them. If the horse is approaching threshold or is becoming mentally or physically fatigued, it’s time for us to take a step back. This may mean checking our ego at the gate. Fight or flight does not help anyone. You cannot teach the horse anything when they are in this state of mind. So riding them through it, doesn’t make the horse understand that “it didn’t work”. All the horse knows is that they survived.

If horses were inclined to throw temper tantrums to get their way, if they were given to inexplicable fits of anger, we would have a lot more unrideable and uncontrollable horses. If riding them through these tantrums was the only solution, again, we’d have a lot more unrideable horses because there aren’t many riders who are that sticky! If horses really understood that all they had to do was flip out and throw a temper tantrum when they don’t want to do something, we wouldn’t be able to do the things we do with them. It isn’t hard wired into them to do. We know horses to be very docile and cooperative animals that choose the path of least resistance. The idea that the horse believes they can throw a tantrum to test their rider gives the horse a higher awareness than they are capable of. And again, if they were capable we would be in serious trouble. The explanation for such behavior is a lot less complex: the horse was put in a bad spot and responded the only way he knows how- like a horse.

It’s hard to admit that we messed up. That this episode was our fault. That we caused it. But the first step to improving our training and correcting this kind of behaviour is accepting that we are the cause, not the horse. Claiming the horse was having a temper tantrum is just another way of blaming the horse for our shortcomings. When we are influencing the horse’s behaviour we must accept responsibility for the outcome. We are quick to do that when it’s a good outcome, and quicker to deny and lay blame when it’s not good.

Good horsemen recognize when their horse is reaching their limits and adjust accordingly. Others keep blazing forward and it is not a shock when it results in a major blow up. Sometimes we miss signs, sometimes they happen fast. Sometimes we make mistakes. We can only try to do better the next time. If throwing the saddle on the horse proves to be a little much, don’t cinch it up and send him off, work more with the pad, find a lighter, smaller saddle. Make it easier. Counter condition (approach and retreat with food rewards in a calm emotional state), pair the scary stimulus with an unconditioned stimulus to change the horse’s emotional association to it at a distance, intensity, and duration he is comfortable with and build from there. If cantering the horse will trigger bucking, work more at the trot. Work at the extended trot. Change the cue. Don’t use aversives to chase the horse into the canter and push him past his fear threshold that he is already fast approaching. Think smaller. Build from where the horse is comfortable. Accept less. Slowly raise criteria. If there’s no way around a bucking fit, it’s because you’re not looking for one.

Humans are more complex. Kids have tantrums. Horses are simpler. They don’t. We just don’t know how to explain their behaviour any other way; we don’t know how to fix it. We don’t want to take the blame. I once believed that these situations were unavoidable that it was the horse. I had all but given up starting colts because if that’s how it worked, it just wasn’t for me. I’m not a bronc rider and I never claimed to be one. But, something inside me knew that there was more. All I had to do was make the decision to figure out what that was instead of staying stuck. If you’re blaming the horse, you’re running out of knowledge.