An introduction and brief history

The origins of modern competitive dressage are based on Classical riding although the two have now diverged to a large degree and are now very far removed from each other.

Classical riding is defined by certain movements of the horse and rider and is a way of training which has a philosophy that develops the horse’s abilities and way of going by natural and light aids which ultimately improve the horse.  The training is always carried out step by step according to the horse’s physical and psychological development and is aimed at improving his soundness and athletic ability and ultimately longevity.

Initially of course, horses were trained as war horses and had to be ridden with one 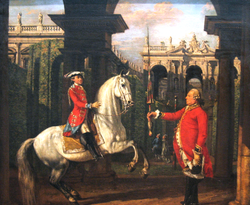 hand and had to manoeuvre on the spot or in one direction or other at speed to attack or avoid attack.   During the Baroque period however, more emphasis was placed on training horses so that they were ridden in harmony by their rider in a light, beautiful and expressive way which was an art form.  Athletic manoeuvres (known as haute école airs above ground) such as the pesade, levade, terre à terre, courbette and the cabriole were developed, which are still being performed today by schools such as the Cadre Noir and the Spanish Riding School of Vienna (photo left).   Classical riding is often also referred to as “Baroque” due to the work of the great Masters of that period.

The first records we have of the idea of a more harmonious way of riding are from Xenophon’s writings “On Horsemanship” (b. 430 BC).  He famously wrote that “Anything forced and misunderstood can never be beautiful”.

With horses being “used” mainly for transport and vehicles of war, sadly the idea of riding in a more humane, gentle way did not seem to develop much from Xenophon’s time (at least we don’t have written evidence of it) until the Italian Renaissance when Federico Grisone (1507-1570) in Naples and Cesare Fiaschi (1523-1558) in Ravenna founded equestrian academies based on Xenophon’s writings.  Their work was famous all over Europe and their treaties on equitation were translated in all European languages. One of Fiaschi’s students, Giambattista Pignatelli passed this knowledge to one of his students Antoine de Pluvinel de la Baume.

We then enter the Baroque period (1600 – 1750) which was the great age of artistic style in the forms of art, music, dancing, architecture and riding.

Antoine de Pluvinel de la Baume (1552–1620) was a tutor and head écuyer in the court of King Louis XIII. He revived Xenophon’s methods of using patience, gentleness and harmony and was strongly against the brutal methods of “breaking” a young horse.  He is most famous for founding the Académie d’Equitation in Paris in 1594 where he trained the young noblemen of the day in classical, humane and gentle equitation.

William Cavendish, 1st Duke of Newcastle (1593 -1676) was a student at the Académie d’Equitation and a great horseman of his time. He wrote a very comprehensive book, “A General System of Horsemanship” which had great influence on two Masters who followed him, namely, De La Guérinière and Baucher.

Francois Robichon de la Guérinière (1688-1751) was the ecuyer to the court of Louis XIV.  He is most famous for his book, “Ecole de Cavalerie” which is said to have formed the basis for training at the Spanish Riding School of Vienna and is still today considered “the bible” to many classical dressage riders. He is credited with inventing the shoulder-in which he used to supple his horses in all gaits, and also the correct seat which allows a balanced ride and correct aids.

Francois Baucher (1796-1873) was the centre of much controversy and criticism in his day due to his low status in French society (he worked in the Franconi circus), since only “gentlemen” were thought worthy of being great horsemen.  He does however have to be credited with the important principle of using flexions to supple the horse, inventing one-tempo canter flying changes and his important formula “ Position proceeds action”.  He wrote two books, the “Method of Riding Based on New Principles” in 1842 and “Deuxième Manière” in 1864.  His second book was not actually published but has been quoted by many of his disciples; Alexis-Francois L’Hotte (1825-1904), James Fillis (1834-1913) and Francois Faverot de Kerbrech (1837-1905), who all became écuyers and left us many great writings of note.

Comte Antione Cartier D’Aure (1799-1863) was a contemporary and critic of Baucher and also tutored Alexis-Francois L’Hotte. He was the chief trainer at Saumur (the national Riding School of France) and advocated the use of jumping and extended trot to improve the horse’s way of going.

Gustav Steinbrecht (1808-1885) – another contemporary and also a critic of Baucher.  He is famous for his work “The Gymnasium of the Horse” which was published posthumously in 1886. His most famous quotes are “ride your horse forward and straight” and his principle that all exercises follow one another in such a way that the preceding exercise always constitutes a secure basis for the next one.

Etienne Beudant (1863 -1949) An écuyer at Saumur and an excellent horse master who wrote many books.  He believed that even ordinary horses and untalented riders could improve and advance to the highest levels.

General Decarpentry (1878 -1956). Had classical riding in his blood! His father and grandfather were both students of Baucher and his uncle was claimed by Fillis to be one of his role models. He wrote several books including the original FEI rule book.

Jean Licart (1896 – 1965) Graduated from Saumur in 1935 and was the écuyer of the Cadre Noir.  His two most famous books are, “Start Riding Right” and “Introduction to Dressage”.  The former is important for understanding the mechanics of the rider’s seat.

Alois Podhajsky (1898-1973) Started his equestrian career as an officer in the Austrian Army and went on to become écuyer of the Spanish Riding School of Vienna.  Podhajsky is famous for evacuating most of the stallions and mares from the school during World War II to safety and thereby saving the Lippizan blood line.  His book “The complete Training of Horse and Rider” sets out the methods of training used in the Spanish Riding School.

Nuno Oliveira (1925 -1989) Studied riding under Joaquim Goncalves de Miranda in Portugal in the style of the riding academy of Versailles.  He was a prolific writer of equestrian articles and a great teacher.  His main influences came from De la Guerniere, Steinbrecht and Baucher.

Phillipe Karl (1947 – current time) was a member of the Cadre Noir in Saumur for 13 years. He has devoted himself to students from around the world on courses and clinics in France, Germany, Switzerland, Italy and USA. In 2004 he founded “The School of Légèreté” to train riding teachers according to his philosophy.

The above great Masters have provided us with a wealth of knowledge in the art of classical riding and as it is not a comprehensive list, I apologise to those dead or living who I have not had space to include.

So why has modern competitive dressage deviated so far from classical dressage?

To sum up, a running theme from all of the classic Masters is that movements of the horse should be achieved without any force, but by developing an attitude of willingness and cooperation of the horse.  Thanks to the many great Masters, classical riders are able to draw from their experiences and writings which have been handed down to us, to progress their horses physical and psychological development without the need for modern day equipment or fads. 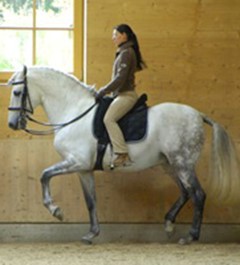 The goal was, and is, to achieve a state of collection and fluid movements performed with minimal and possibly invisible aids from the rider to give an impression of harmony and beauty.  Movements should seem effortless with the horse and rider as one.